This is an invigorating pancake made up of a mixture of banana, eggs, milk and cinnamon. You can also use honey as a sweetener to have healthier pancakes; honey gives it a nice golden color as well.

Banana together with cinnamon tastes perfect and this association has a wonderful fragrance. Cinnamon feels so faint in this light banana pancake; yet if you don’t like cinnamon flavor, vanilla can be a nice substitute.

To have a soft fluffy pancake with a light texture, use eggs and a slight amount of baking powder. It is eggs and baking powder which make this dessert batter puff. Mixing the eggs as to let them foam, will make the pancake batter spongy and light. 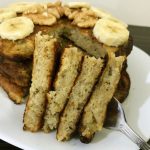 If you want soft fluffy pancakes, do not stack them after removing from the pan. Place each separately to give them chance to cool down slightly. However, I leave the first three to cool, and when the fourth one arrives I stack them all. I put the fourth one hot on top of the others and pour honey on its edges so that it flows onto the sides. (Honey drips well on hot things and that's so appetizing.) While stacking the pancakes, you can add honey, nutella or jam between the layers. Garnishing the pancake with banana slices, walnuts, breakfast chocolate, chips chocolate, or a variety of jam, marmalade or seasonal fruits will make it an energy bomb. Additional points: You can choose the amount of sugar as you wish. If you don't like it too sweet, add less sugar. If you want to add honey between layers when serving, you can add less sugar or remove it altogether. Baking powder is optional and could be removed. You can use water instead of milk, but milk gives this pancake better taste and texture. After mixing the flour, do not stir excessively. Egg puff gives this pancake a soft and light texture, and the more you stir the more the egg puff fades. So once you're sure the ingredients are mixed together, do not stir again. To measure flour, don't do that by placing and pushing the cup into the flour container because flour particles stick together and more flour gets into. Spoon the flour and pour it into the cup until it's full. Do not press the flour together, but you can smooth its surface gently. To use a sieve is to prevent the flour getting lumpy and let its particles separate well. The taste of cinnamon in this pancake is very faint and shouldn't be felt at all. But the fragrance of cinnamon besides banana is wonderful. Banana is heavy and may settle before you put the batter into the pan; so stir it a bit before pouring the batter. To fry the pancakes, pour some oil into the pan but not too much, because it makes your pancakes greasy. Having poured the batter into the pan, there's no need to spread it with a spoon. It's loose and flattens by itself. If the batter shape in the pan is messy, rotate the pan to make it well rounded. Let the pan heat well, then add the batter. This makes differences. If the pan isn't hot enough and the pancake is still soft, when you spoon it to turn it over, your pancake will break. This pancake doesn't stick to the frying pan because of the eggs in its recipe, unlike the banana pancakes without eggs that I've taught on my blog. But preferably use a non-stick pan. The bottom of the pan you use to fry pancakes should be thick; thin frying pans are not a good choice to cook soft banana pancakes in. Since they transfer heat too quickly, this may burn the skin of the pancake and the flesh remain uncooked. In general, never forget that non-stick frying pans are the best for cooking pancakes. If you put the lid on the pan, the inside of the pancakes will be cooked better. This is especially true when you're cooking chubby pancakes. Turn the heat down and keep an eye so as not to burn them.

Most important tips to have fluffy soft banana pancakes:

This pancake has a fluffy and spongy texture, just like a spongy cake. The aroma of banana and cinnamon is so great and you can’t enough to eat this. so get up and try it.

If you like to don’t use the eggs, I have a post: eggless banana pancake recipe. The basic ingredients of this pancake are banana, milk, butter (or oil), and sugar (or honey). The use of baking powder in this recipe is optional and I advise baking this.

I also put a Nescafe cake recipe in one of the blog posts, which is fantastic. It has a spongy texture and its Nescafe aroma is really pleasant and lovely.

Its main ingredients are: flour, milk, Nescafe, and corn starch, like other cakes.