Beef bones, by which I mean meaty bones of beef knuckles and shanks, are of the most delicious and affordable parts of beef. A savory and nutritious extract is obtained from beef bones, used as a base to flavor foods. Foods prepared with bone broth, marrow, or the resulted oil are simply delicious.

After an extended period of simmering, bone marrow gets well cooked and comes out, and even the cartilage becomes soft and jelly-like. In this way, the bone extract becomes gelatinous and concentrated, and all the materials in the bones leeches out into the sap.

Beef bones also release a lot of fat when cooking, and in this article I’ve taught you the best ways to make bone broth fat. You can use this natural fat to roast steak and Beef Stroganoff.

Because I like to make everything at home, I’ve also made this oil at home. If you make oil at home, you just know what stuff it’s made of and what the date of its making is. As a result, you are using a healthy substance that is fresh; In addition, no chemical or industrial compounds have been used in its making.

There are three ways to cook bone broth: In the first type, after about 3 hours of cooking, the marrow inside the bones separates so you can make soup with it.

If you cook the bones more, after about 6 hours of cooking, the fat will be extracted well. If you cook more for about 12 hours as for the third type, the cartilage will break away from the bones. This gelatinous cartilage is nice for healthier joints and bones.

* Already in the second stage, however, the cartilage can be separated, but if the cooking reaches 12 hours, it will get softer and be better separated.

The benefits of bone broth

Bone broth is rich in vitamins and minerals such as calcium, copper, iron, magnesium, potassium, etc., all of which are very helpful to the body. The gelatin contained in it fortifies the digestive system, helps make collagen for the skin, and strengthens the bones and joints.

How to separate fat from bone broth?

There are several ways to separate the fat from the broth: 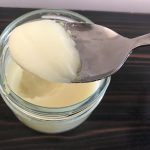 How To Make Bone Broth Fat

Having cooked the bones and spooned off the oil on the surface, the bone broth coupled with the marrow will remain at the bottom of the pot. Your bone broth is ready, keep it in the freezer (I’ll explain later in what containers you can store it in the freezer). But I don’t freeze bone broth in this way, rather I track the following steps which will result in a much more attractive appearance: When the bones are cooked and slightly cooled down (but still warm), you would do the following.

what to do with bone broth fat?

As I said, bone broth fat is a natural and healthy fat that can be used in a wide range of dishes. You can use this oil as ordinary oil for frying.

Here are some ideas for using bone broth oil:

In what foods can I use bone broth?

You can use bone broth in many foods. Almost any food can be flavored with it. Bone broth gives good concentration and consistency to your dishes. In general, you can add it to any food cooked with red meat. But in my opinion, the use of bone broth in the following cases would end up with remarkable results:

I suggest you try chickpea soup (or khoraak-e lubia) made with bone broth, which is superb. Of course, I’ve seen that they cook chickpeas with the bones (or qalameh), and this makes chickpea soup taste so delicious and thick.

How to make chickpea soup with beef bones

Put chickpeas to cook with fresh beef bones or bone broth with onions, salt and pepper. It takes about 2 hours in the pressure cooker to prepare your delicious chickpeas. I advise you take a look at the post about how to cook chickpeas on stove.

In the second type of cooking, ie about 6 hours of simmering, the fat of the bones is well extracted as oil. It is a natural fat and has high energy. You can use it to cook or braise food and because it’s free of industrial or chemical materials, it is far healthier than the oils on the market.

This is the most significant part of this article I’m going to explain. After cooking the bones, you’ll see that a sizeable portion of it is oil floating on the surface. I lift off this oil and use it in cooking, even if the amount turns out to be slight. There are several ways to lift off the oil / fat leeched out of the bones:

1- After the bones are well cooked and still warm, spoon the fat off the surface with a scoop.

2- After the bones are cooked, leave them in the fridge for a few hours to cool down. The oil accumulates on the surface and coagulates slightly. Then you can easily collect it.

3- The third way to separate the fat from the bones is to use a bowl of ice blocks.

After collecting the oil, pour it into a lidded container and store it in the fridge. You can keep the remaining broth in the freezer as an extract. Or simply you can have it with bread which is very tasty and savory.

Softening of cartilage and gelatin

If the bones remain on the heat for 12 hours, ie the third type of cooking, they end up so soft that the cartilage separates from them. Cartilage is so beneficial for strengthening bones and joints and is used to prepare bovine gelatin.

How to store the bone broth

Bone broth can be stored in plastic bags or any other container in the freezer. But I have some storage ideas:

There’s more marrow in the beef bone than in the sheep bone.

You can use a pressure cooker to reduce the cooking time by half.

If you’re buying beef bones from a butcher, ask him to break them into smaller pieces so that the marrow cooks nicely and comes out.

During the simmering of the bones, if you feel the water is not enough, you can add boiling water.

If you want to prepare beef bone broth to consume in foods and soups, you can add bay leaves, carrots, celery, black pepper, cinnamon sticks, onions, or garlic cloves to flavor it.

This way, however, it would be difficult to lift off the oil released from the bones. When you pour this stuff into the bone broth, they are mixed with the broth, and as a result, the oil may be difficult to spoon off.

If some of the materials I said are not readily available, there is no problem. Use whichever you have, but onions are essential to compensate for the fusty smell of the bones.

I make bone broth without salt and spices. But you can season it if you want. My suggestion is not to do this because you may want to use the broth in foods not wanting those spices in their recipe. Or it may already have enough salt added to it and the extra salt in the broth will make it too salty.

If you add a lot of onions (especially red onions), your broth will taste overly sweet.

If you feel your bone broth is thin and you want it thicker, put it back into the pot and over the stove to get thick enough.

You can put the bones in the oven for about 2 hours to roast and grill and then pour water on them and simmer. In this case, you’ll end up with a darker-colored bone broth.

Instead of bone broth, you can use the very bones in your stew. In this case, you can cook your soup or stew with sliced bones. It may take longer to cook, but it is invigorating and delicious, and the stew will be thick and concentrated nicely.

Note that beef bones are not suitable for everyone because they’re greasy. So use it with caution if you have high fat or cholesterol.

[1] A traditional pottage-like meal generally made of wheat as its main ingredient and oftentimes meat, served mainly for breakfast.

[3] Roughly translated as “minced meat stew,” it is a popular food in Iran, made of diced mutton, tomatoes and split peas, generally served with polo.

[4] One of the most well-known dishes in Iranian cuisine, made of seasoned lamb/beef, sauteed herbs, kidney beans and dried lime, served with polo.

[5] Dampokhtak, Adas-polo or Staanboli-polo (a dish similar to Spanish rice) are mostly cooked in the same manner, with the main ingredients being rice and dried beans or vegetables.