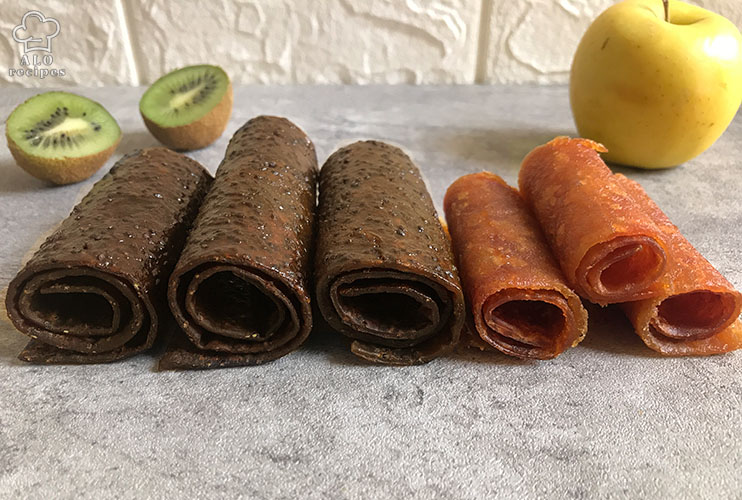 Lavashak, or Persian fruit leather, is a popular snack among Iranians. By cooking fruits, you get a thick puree, the puree is then dried in thin layers and cut into different shapes.
Lavashak can be sour or sweet and sour.

It is a delicious and lovely option for snacks. Adding a little bit of salt to the sourness, it becomes extremely mouth-watering.
Each fruit has its own benefits and vitamins. By making Lavashak, you can profit from all those! Lavashak helps with constipation too.

By making Lavashak at home, you no longer waste the extra fruits in the fridge. You can also benefit from those fruits for longer because Lavashak has a longer shelf life than fruits.

Making these delicious Persian fruit leathers is very easy. You only need some fruit and a bit of salt or sugar. As for drying, there are different methods. I’ve written whatever you need to know about them here!

Lavashaks exist in different colors and flavors. You can use various fruits to make them, but these fruits are the best for making fruit rolls: 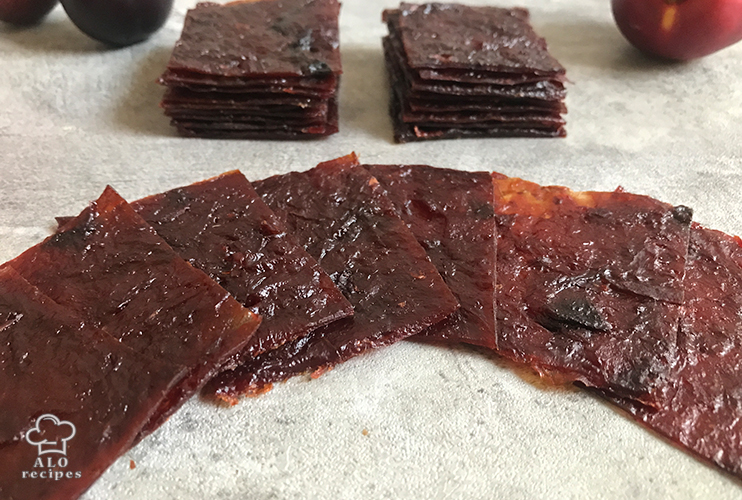 You can even make a compound Lavashak which contains various fruits and is called multi-fruit Lavashak. The following combinations are some of the bests:

Peach is a soft fruit and one of the best fruits for making Lavashak. Peach Lavashak is extremely pleasant and sweet and sour. 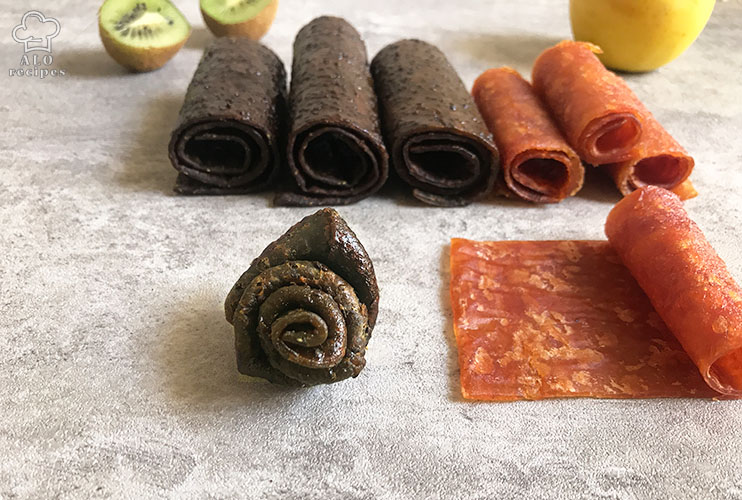 Most Lavashaks are either sour or sweet and sour. This taste mostly comes from the fruit itself. No particular additive is used, only some salt or sugar to balance the taste.
Sweet Lavashaks exist too but I don’t think they’re popular, because the original taste of Lavashak is sour.

The most appealing fruit leathers are the sour ones with a hint of salt. Sourness is very pleasant when served with saltiness, even by thinking about it, I can feel the sourness of Lavashak in my mouth!

Why do we cook the fruits?

The cooking process makes the fruits lose their raw taste and enhances their pleasant taste, this is why Lavashak gets a wonderful flavor that you can’t get enough of!

In what container should we put the ingredients to dry?
After cooking the fruits, you can flatten the fruit leather on a tray to dry up. You can cover the tray with the following:

You can grease the paper or plastic with a pastry brush dipped in oil, but it’s not necessary.

Important- remember not to cover the fruit leathers with things like plastic, they won’t dry and might become moldy. A basket or net fabric is alright since it allows airflow. So, if you live in an area with a lot of dust in the air, either keep the fruit leather inside the house or cover it with a basket.

How thick should Lavashak be?

1-3 millimeters is a good range for thickness. Don’t let it get thicker than 5mm.

Pomegranate Lavashak is an excellent and delicious fruit roll. Making it is the same as other fruit leathers, you need to make a thick puree of the fruit, cook it and dry it. I’ve explained it in a separate post. I recommend you check out my “Pomegranate fruit leather or Pomegranate lavashak” post.

In Iran, during summer, The Lavashaks are left under the sunlight on rooftops and they dry up in 2-3 days.

In other seasons or other parts of the world like Europe, that don’t get much sunlight, you can use an oven. Drying Lavashaks in the oven takes less time.

Making Lavashak under the sun

After cooking the fruits, cover a tray with plastic or cellophane. Spread the fruit puree on the tray and leave it under the sun for 2-4 days.

The exact duration depends on the thickness and water amount. If it’s thin and the puree’s water has vaporized properly, it dries up faster.

You might need to turn it over so that the other side receives sunlight as well.

Making Lavashak in the oven

-If the edges of your Lavashak are too dry while the other parts are still a bit moist, take it out of the oven and leave it in the room to help it lose moisture.

-If the oven gets too hot, turn it off and on again. Do this a few times so the Lavashak dries due to the indirect heat and doesn’t receive too much heat.

-Another solution is leaving the oven door fully open, or taking the tray out of the oven, then putting it back inside again. In other words, you should do something to prevent your Lavashak from receiving too much heat, or it’s gonna burn!

-Remember not to let it dry too much, it’ll be hard to chew and will get bitter. This is a burnt puree, not a Lavashak. A burnt apple lavashak: 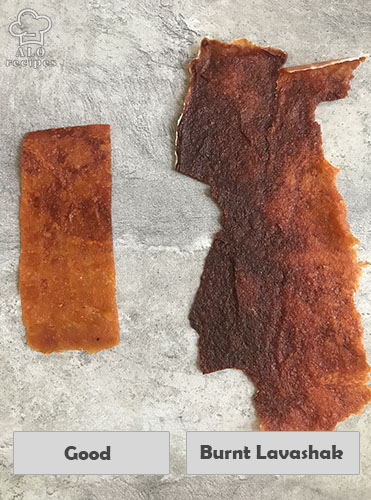 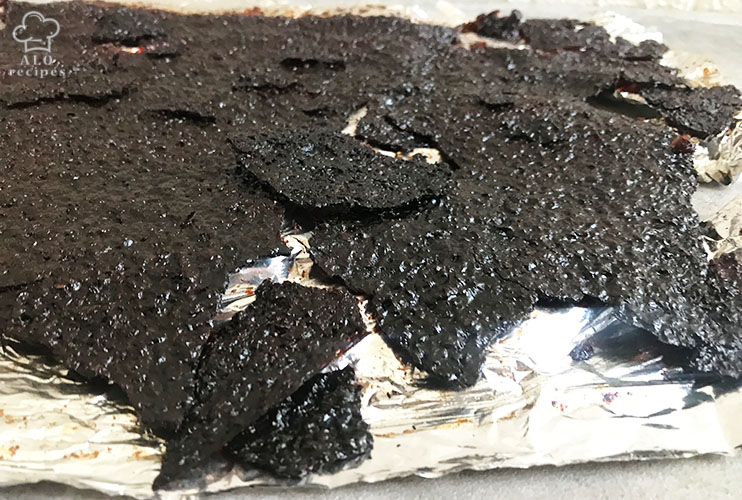 What can we eat Lavashak with?

You can eat Lavashak by itself, or combine it with other things to make it taste hundreds of times better!

-Add barberry to the ingredients of your Lavashak to make it sourer. Soak the barberries in water beforehand.

-Use one spoonful of lemon juice or 1/2 teaspoon of citric acid.

-You can add pomegranate molasses after the Lavashaks are ready. Cut the fruit leathers into strips and roll them. Droplets of pomegranate paste falling from in between the rolls is mesmerizing!

-Cover the fruit rolls in pomegranate paste and dried cherries, this is a mouth-watering combo!

-To make Lavashak at home, use ripe fruits.

-Don’t throw away the fruits that have been sitting in the fridge for a few days, make Lavashak with them!

-Sour pomegranates that are not much popular and might go to waste are great choices for making Persian fruit rolls. 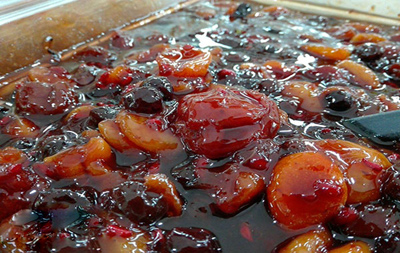 -Separate the Lavashaks from the paper after they have dried up. Use a knife or scissors to cut them into preferred pieces, or roll them up.

-You can cut the fruit leather without separating it from the plastic.

-Keep them in lidded storage in the fridge. They are edible for 2-3 weeks and until whenever they don’t become moldy.

-If they stick to each other, put a piece of cellophane or parchment paper in between them.

Make sure to add pomegranate paste and dried cherries to your Lavashak and try this insanely good combo! This way of serving Lavashak is pretty common in Iran.

If you have any questions about making these delicious Iranian Lavashak, ask away in the comments! I have a lot of experience with making Lavashak and will gladly answer your questions.