Tahdig is one of the good ideas to serve besides rice and it’s so crunchy and delicious. It makes your table nice and stylistic and is just lovely. Tahdig is the part of the polo that sticks to the pot bottom and gets finely crispy and toasted. Tahdigs of different kinds including bread tahdig, potato tahdig and tahdig with yoghurt and saffron are popular in Iran.

I suggest that when cooking rice, make your food much more delicious and attractive with this bread tahdig. It only takes a minute or two to put tahdig in the pot you’re going to make steamed rice with and then you can enjoy the persian rice with bread crust.

Persian polo is made in two ways: Abkesh (use colander) and Kateh. In this post, I’m going to explain how to cook rice by Abkesh or Ashpali method. The recipe of bread tahdig (Persian rice with bread crust) is very simple and there’s just a few easy tricks to it.

In this post, I’m going to describe all the tricks you need to have a crispy tahdig. Bread tahdig is similar to potato tahdig and there’s no big differences.

In the recipe of Persian tahdig (Crispy persian rice), the rice is cooked in boiling water for about 2-3 minutes. Then it’s drained and a piece of bread is placed in the bottom of the pot, and finally the rice is let to be steamed for another 50 to 60 minutes on very low heat.

The result of cooking rice this way will be a tempting and attractive tahdig, making the rice grains to be cooked and steamed nicely into the bargain.

The most important points in Persian tahdig recipe:

If you want to have a well-fried, golden and roasted tahdig, keep the following in mind: 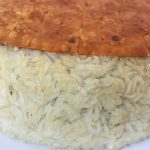 Press the edges nicely as well and level them. This is in order for the rice to take the shape of the pot.

When finished, you’ll see that the rice has taken the shape of the pot and tahdig has formed. In Iran, this kind of cooking rice is also called polo qalebi (Polo which is molded) as the rice takes exactly the form of the pot. Having finished, remove the pot from the heat.

Put a dish on the lid of the pot and turn the pot over. Polo qalebi retains its shape well on the dish. Of course, because the rice is pressed together and less steam could flow between the grains, there would be a need to make a few holes in the surface of the rice and to wait more than usual for the steaming to be done.

You can garnish polo qalebi with raisins, barberries, sliced ​​pistachios or almonds and surprise your friends at parties with this elegant honorable dish. You can cut the bread with scissors and cut it into small square pieces. Then pour oil in the pot and heat it. Arrange the pieces of bread in the pot. When both sides are slightly fried, pour the al dente rice on it.

With this method, after steaming the rice, you will have beautiful square tahdig and tahdig will not crumble when you get a piece. Each person gets a piece of the tahdig. 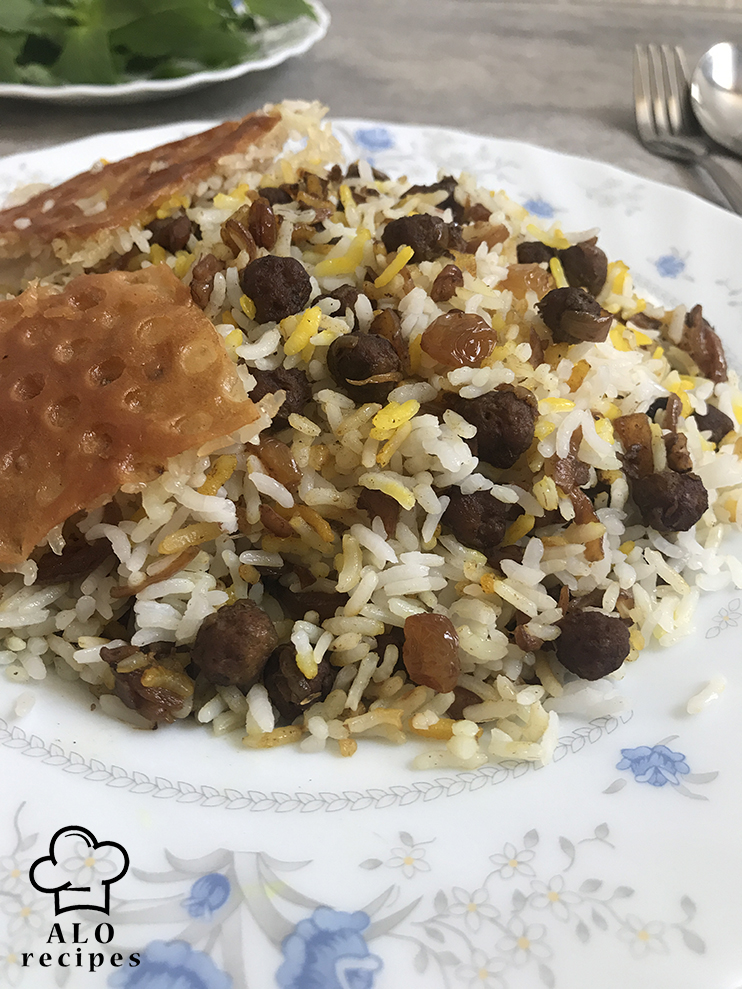 Tahdig : Derived from “tah” (meaning “bottom”) plus “dig” (meaning “pot”), is a traditional common Iranian recipe in which you place sliced potatoes or some bread in the bottom of the boiled rice (or “polo” in Persian) pot to be stewed together.

I am Nafiseh and I love cooking and baking. I search for different recipes and test them. This is like a challenge and a hobby for me.
I especially dedicate my time to finding healthy and homemade recipes. It makes me happy to share these recipes with you. I am glad that you follow me and are present on my website.

8 recipes with chickpeas and rice

Beef tips and noodles with cream of mushroom soup